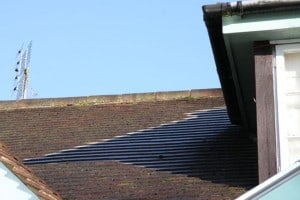 This photo of the roof of my home tells a story of the sun’s journey.

The morning shadow from the dormer window is retreating and the sun is reaching more of the roof with each minute. The frost from the night before is thawing in the warm light. It is also forming a very simple shadow compass. At this time of year the sun rises very close to east and the direction that the frost is retreating will be west to east. The protruding ‘nose’ of frost near the top of the roof can be joined to the jutting part of the shadow to form a near perfect west-east line.

This effect can be seen in so many places at this time of year, as we get closer to the spring equinox (20 March). It will also work close to the autumnal equinox (23 September this year), but not in summer or winter when the sun rises and sets a long way from east and west. At these times there are other, better things to look for.

This balance between the seasons, between light and dark and east and west is something the world shares at this time of year. It comes as the sun finishes its long stay over the southern hemisphere and gets ready to cross the equator, the equinox itself, and begin a six months tour over the northern hemisphere.  This time last year I happened to be checking that the sun was rising where it ought to be in Libya.