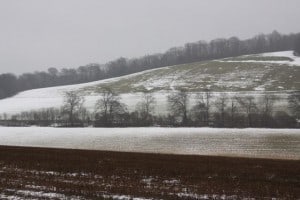 The snow is melting away, but not at the same speed everywhere. The warmer wind which is blowing from the southeast today is leaving green swathes wherever it reaches. In this photo, which is taken looking east, the snow in the top right corner is being sheltered by woodland, but the snow to the left is also being left relatively untouched by the same wind because it is partly in the lee of the hill, but also because the woodland to the left of the picture is forcing the airflow up over it. In aviation terms the wind appears to be performing a ‘touch-and-go‘, coming into land before taking off again straight away.