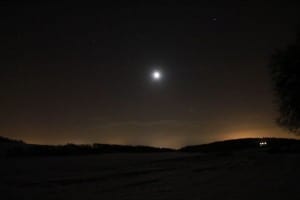 For better or worse I seem to have a sixth sense for when conditions are great very early in the morning. I woke at 5.30am and was instantly drawn out into the neighbouring field to take in the scene and to take a picture. The snow was being lit up from the south by the waning crescent moon, the stars were out in force and Mars was peering down in red confidence from high in the west.

I stepped over the style into the field, camera in one hand, tripod in another and then it all went wrong. To avoid waking anyone I had not stumbled around for my clothes in the dark, but opted for the worryingly standard kit for this time of day: pyjamas, thick coat and wellies. My left foot slipped a bit on the style’s ice and a successful bid to save my skin and camera led to the tripod taking a big hit. It’s knackered. A fair price for escape though, not unlike the sad loss of my Land Rover Defender before Christmas. There is a saying in aviation, ‘Any landing you walk away from is a good one’. I suspect that this is not an expression that will have those with a fear of flying racing to the airport.

Starting to shiver in cold wet pyjamas, this picture was the best I could manage. The light pollution from the south coast is clearly visible, but it cannot quite drown out Virgo’s brightest star, Spica, in the top right of the picture. The lights in the bottom right are from my local village, Eartham.