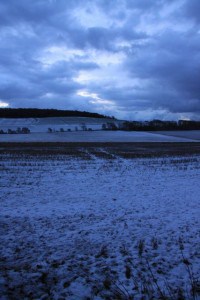 This is not the glorious image of the winter solstice sunrise that I had been planning for you. Events conspired against that.

The original plan had been to drive up to a semi-secret location in the South Downs and take a picture of the sun rising in what were originally forecast to be clear cold skies.

Yesterday morning I was driving the four miles from home to the gym but all four wheels of the Land Rover Defender lost traction on black ice and I slid headfirst into a substantial tree at about 25 miles-per-hour. I walked away from the car-and-tree amalgamation and felt very lucky to be in much better shape than either. My next thought was that my wife and kids were due to set out on the same road an hour after I had. My mobile phone was on charge at home. I ended up having to run home, cross-country in snow and as fast as I could, in order to get to them before they set off in a car that would have found the conditions even more lethal. I know the local country quite well, but had to take the most direct route home, something that I had not had to do from that area before. The sun was up and I made my way through woods and fields and over fences in a straight line home, obviously no map, compass or GPS involved. I got back just in time. The car was picked up later by a recovery garage, I have yet to hear whether it will drive again.

I was still keen to get a shot of the winter solstice sunrise, but without a car made a plan and laid out my clothes and boots last night. When I got up at 6am, the weather had deteriorated and cloud dominated. Still, it’s good to be alive at this moment that has been celebrated since prehistoric times!

I never got round to updating this until now. The car was a write-off, twisted chassis. I got a bruised something, honestly can’t remember now. Persuaded family to take a different route, although Mrs. G did seem to think it was a lot ado about nothing.

I had been reminded, once more and in an adrenaline-soaked way, that exercise outdoors is nearly always more invigorating than the gym.