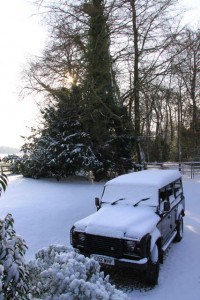 Yesterday afternoon I threw the snow off the Land Rover and headed out into the white – I had about half-a-dozen minor outstanding ‘to-do’s for the book, but there is no point writing a book about natural navigation if you are the sort of person who can resist these conditions. Dressed in a suitably ridiculous balaclava I made my way to the foot of Halnaker Hill and then proceeded uphill in wellies. Unless I’m on a mountain I find wellington boots with two pairs of socks the ideal footwear for small excursions in snow, even good hill-walking boots let some moisture in eventually, but wellies do at least stay dry even if it means slipping about a bit in places.

A roe deer jumped across the path in front of me as I climbed the hill and there was the red breast of a robin waiting on the branch of an ash, modelling part time for a Christmas card perhaps. The first thing that struck me on reaching the windmill was the large patch of green grass shaped like a cone to the south-southwest. A distinct snow shadow tucked away from the heavy snows of the night before. It was a clue both to the wind direction of the night before, but also the strength of the wind. The snow must have fallen in something close to a storm as the shadow stretched quite far from the base of the windmill, suggesting strong winds. This had led to some unusual effects elsewhere as well. In light winds the snow tends to accumulate on the lee of obstacles like trees, but when the wind is strong it is plastered onto the windward side where it sticks. From a navigational perspective it does not matter hugely whether the snow has stuck to the leeward or windward side predominantly, because once the orientation has been identified it will be consistent over wide areas. In fact the north-northeast of the trees all the way down the A roads from London to Chichester had shown this trademark strip of white.

The wind direction had not changed noticeably since the snow fell and I sheltered in the relative warmth of the lee of the windmill with a flask of hot chocolate, venturing out every few minutes to take photos. The two day old moon was the first object to appear after the sun, followed quickly by Jupiter in the south. This morning I was sent this photo, by Fred Smith, a retired airline pilot who came on one of my RGS courses a few months ago and who now lives in the Caribbean. It shows the same two-day-old moon of yesterday, which is the same phase when viewed from all over the world, but the orientation changes with latitude. The faint star just visible below the moon is Mercury, which had not been visible in the cloud near the horizon in Chichester. More often than not an ‘evening star’ will be Venus, but on this occasion Mercury is far enough from the sun and Venus is hidden in the bright glare of the sun itself and impossible to see.