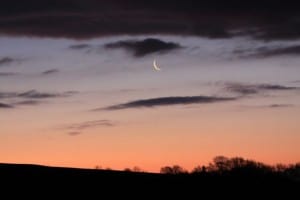 A restless night for lots of reasons, but that did at least allow some good Geminid-watching. Most meteor, ie. shooting star, showers occur when Earth passes through the dusty trail of a comet. The particles burn brightly as they hit our atmosphere. The Geminid meteors are some of the most dependable for night-skywatchers, taking place each year in mid-December and characterised by relatively slow moving yellow burning points. They appear to originate in the part of the sky that is home to the constellation Gemini, hence the name. The exact nature of the object causing the Geminid showers is less well understood. It has the beautiful name, Phaethon, was discovered in 1983 and is believed to be a now burnt-out comet, but may actually be closer to an asteroid.

The best meteor I saw last night, while well wrapped up and standing in the neighbouring field, burned for about two seconds with an orange glow and left a visible trail of smoke.

UPDATE. I’ve just added a photo I took a couple of minutes ago. It’s been a long night, with little sleep and a heavy cold, but it is still hard to be in a grump when a night of meteor showers is replaced with a scene like this. The thin crescent moon, two days off new, hanging low in the pinks and oranges of a winter southeastern dawn sky.