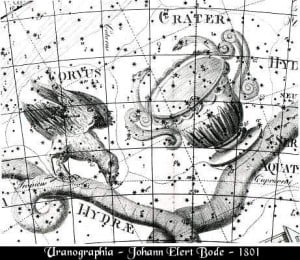 First thing this morning our bathroom was bright with diffused light from the blinds that had been filled with moonlight from the west. I put on a thick jacket and pair of Ugg boots and wandered outside. Looking up I was spoilt. The moon was indeed throwing her weight around and this can sometimes make for imperfect stargazing, but the cold air was clear enough that between the first glow of dawn in the east and the moon’s light in the west there were riches to choose from. Gemini, Leo and Virgo were high in the sky. The dark spaces between them were punctured with Saturn and the reddish Mars. In the east another tinge of red was clear in the form of Arcturus. (It was less than two months ago that I was wondering at Arcturus and Bootes in the western evening sky.) Low in the southern sky were Corvus, the Crow, and Crater, the Cup, two constellations that I have not seen for a long time. If that were not enough, a satellite passed from north to south overhead to cap it all off.