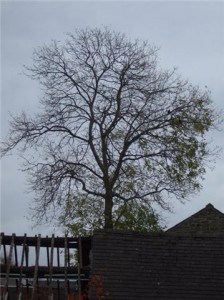 This just in from Richard Webber, Natural Navigator alumnus, researcher and correspondent:

‘After a long walk round Mam Tor and Lose Hill near Castleton, we

rested in a café for tea and slices of Derbyshire curd pudding.

to the tree near by – see the pic. Half still had leaves while half

didn’t. My hypothesis was that the south facing side would hold its

leaves longer – given more light and warmth. I checked the map to get

a feel for where south was and, indeed, the leafy side was facing due

south. Looking at the branch structure I think this points to the

growing more upwards than outwards – as on the leafy, south facing

side. Am I right?

And Oliver, aged 16, suggested that the birds might also be roosting

on the warmer, south facing side too! The “WWIS” Virus is contagious!’

In answer to your questions, Richard, your hypothesis looks solid to me. Plants do not have a central nervous system and so rely on the ability of

all their different parts to act and react autonomously. The seasonal fall of leaves is influenced by temperature, but primarily by length of day (more specifically, night, which is how commercial growers trick plants into thinking it is a different season: they turn the lights on for a period in the middle of the night, thereby halving its length). The southern side of trees in the UK will be warmer, but also have a marginally ‘shorter’ night. The ‘Tick Effect’ in the branch shape is also supporting this, as you spotted. The right, southern side of the tree would also be heavier if you sawed it down the middle of the trunk.

There is also some gentle ‘combing’ from right to left in the upper branches which would be consistent with the hypothesis, and caused by the prevailing southwesterlies.

There are no strong moss or lichen trends on the visible roof which we would expect if looking due north or south, so this would support the idea that we are indeed looking east (or west).

The birds one is interesting and less clear cut. They would like the warmth, so Oliver may well be onto something there. They might also like the fact that the branches are closer to the horizontal there too. Birds also like to rest, roost, nest and generally congregate in sheltered areas and while that will often be on the northeastern lee side, in this instance the retention of the leaves on the southern side might be giving more shelter from the wind, or at least the appearance of it!

Thanks for sending this in and I hope all the usual creams work for your contagious virus!