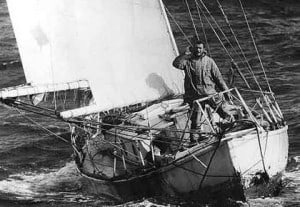 My thanks to Tim Hopwell for this email:

Hope all is well.  I thought of you on Wednesday evening whilst at the RGS for a talk by Ranulph Fiennes, Knox-Johnston and John Simpson (a spin off from the ‘Top Dogs’ series they produced in aid of the Transglobe Expedition Trust).

Sir Knox made a very interesting point regarding his round the world trip in 1968. Due to his navigational equipment being so basic by today’s standards (he had a barometer which came free with some Guinness) he developed the skill of being able to judge where land was and how far he was from it by observing/sensing the wave reflection ie. The effect on the water of the reflection of the waves back out to sea once they had hit dry land.  He reckoned he could judge accurately up to about 20 miles, whilst the Polynesians who are the renowned experts in the field can be accurate up to 100!  Fascinating stuff!

I am sure you are probably aware of this technique already, the interesting point he made was that he would have never have developed this skill had he had all the modern navigational equipment available today.