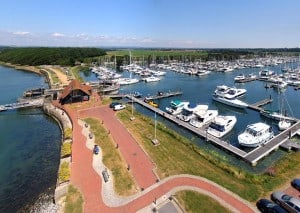 I had hoped to sail to the Isle of Wight on Saturday with some old friends. We slipped Chichester marina at eight in the morning in my Contessa 32, fully aware that the forecast was a bit spicy. The sense of foreboding increased slightly when the Chichester marina lock-keeper called down to me, ‘Have you seen the forecast?’ I said ‘Yes. Force 6 gusting 9.’ He replied, ‘OK, well when the lock gates open you will need to gun the engine full throttle and hold your line otherwise you will be blown straight onto the piles.’ I thanked him and felt a small surge of adrenaline.

We made our way out into the harbour and at times it was hard to hear each other speaking as the wind whistled past our ears. After an hour I decided that we ought to swallow our pride and return to the marina and postpone the trip to Cowes. The final straw was the fact that the engine was struggling to move the boat above 2 knots into wind, which did not bode well. The wind was from the west, the direction we wanted to head and it would have been a merciless and exhausting six hours of tacking at best, when the tide turned we would make no progress for our efforts either. None of my friends had ever sailed in those conditions before and I decided that it wasn’t the day to introduce them to such joys. It had the potential to go badly pear-shaped. Instead we moored up, swapped our soft-soled shoes for boots and headed off in the Land Rover for a very pleasant walk in the South Downs. We still got plenty of fresh air, just a little less brine in it than originally planned.