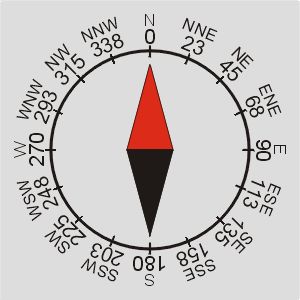 Russ Altendorff came on a course in the hills yesterday. He is a keen sailor, electronics guru and author of a popular blog on the more technological side of marine navigation. During our afternoon we locked horns with topics that ranged from the desert to the ocean and back to a southern England that was experiencing hail, horizontal rain and even the odd sunbeam. We also discussed ‘confirmation bias‘, or the tendency to make your observations fit your preferred hypothesis. Natural navigation is particularly susceptible to this, nature is rarely absolute and is so often open to interpretation. On a cold wet day it is even more likely that you are going to want the evidence to fit your theories.

At the end of the afternoon the sun was down, the moon and Jupiter were high in the southern sky, and it was time for Russ to take on a challenge. I asked him to find his way back to our parked cars and explained that they were 1km northeast of where we stood. I was delighted to watch Russ methodically take in and analyse at least half a dozen natural clues to direction before setting off. The next minute was fascinating as I watched two approaches clash due to confirmation bias.

Russ’ analysis of the directional clues was excellent and he was able to point to north extremely accurately as a result, he probably got within 5 degrees. He pointed to north with his left hand and then raised his right hand and pointing, said, ‘So that must be northeast.’ The only problem was that he was only pointing about 25 degrees off north, ie. close to NNE. This was surprising as there was no doubt he knew where northeast was relative to north. The reason became clear a few moments later when he said, ‘North is there and the car park is there.’ He was pointing about 20 degrees off north.

The probable explanation lay in Russ’ understanding of where he thought he was relative to the car park. Earlier during our walk we had discussed Tuareg and Pacific techniques of mentally keeping a log of your position and destination relative to that position. Russ was using a similar technique to gauge where he thought the destination was, he had kept track of our circuitous route from the car park to the starting point and so had a rough idea already which way the car park was. He was out by about 20 degrees which wasn’t at all bad, but what it did mean was that he wasn’t comfortable with the correcting nudge that the natural clues were trying to give him. Rationally he knew which way was north and therefore which way must have been northeast, but this did not sit comfortably with his mental log and subsequent theory of direction. Consequently he shifted northeast closer to north in his gauging of the horizon before setting off. We found the car park as lightning sparked up to the southeast.