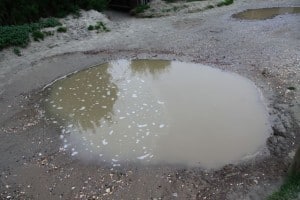 It is a pity that I didn’t have a video camera with me to capture the motion in this puddle. The wind was blowing in from the southwest, but the trees that can be seen in the reflection of this puddle were offering some shelter. The half of the puddle nearest the trees was in their lee and receiving little or no wind. The half that was further from the trees was catching a breeze as it dropped down over the trees. The net result was that the muddy bubbles were being corralled into the lee half, where they were also being pushed gently from one side. It set up a gentle, but constant gyre of bubbles in only one half of the puddle. In a very roundabout way, that has some similarities with other lee methods, the dirty bubbles in this puddle are trying to point in the direction of the wind. Southwest.