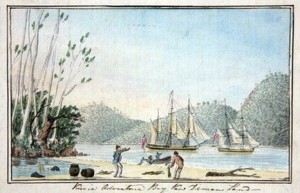 This from a story on the BBC website today:

‘A new UK project is digitising nearly 300 Royal Navy captains’ logs from voyages dating back to the 1760s.

They include the voyages of Charles Darwin on HMS Beagle, Captain Cook’s log from HMS Discovery and Captain Bligh’s journal from The Bounty.’

The project leaders are hoping that the data they organise will shed more light on climate change, which is why it makes news. It is very exciting from my perspective for a different reason, because it will possibly make a lot of navigational observations from the 18th Century more accessible too.

When the 18th Century French navigator, Louis de Bougainville, was closing on the shores of Australia he noted in that ‘a long time before sunrise a delicious odour announced the vicinity of land…’