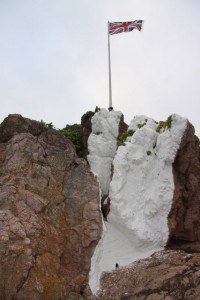 A union jack hoisted above a flagpole higher than any of the small huts on an island may seem over-patriotic or even jingoistic, but there are two good reasons for this one on the tiny island of Marmotiere. Firstly the flagpole has been used as a transit marker to help with pilotage for boats navigating the treacherous and rock littered approaches to the island. Secondly, the Norman French, who are only six miles away, actually attempted an invasion of the Ecrehou islands in 1993. No shots were fired and the land remains in the parish of St Martins in Jersey. The white paint below the flag remains the foremost of the current transit markers.