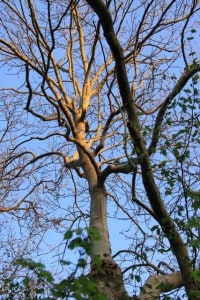 I can remember sitting at a restaurant in the small and perfectly formed fishing village of Trehiguier in southern Brittany last July. I had my back to the sun, which was setting behind the row of houses behind me. I watched the crisp edge of a chimney corner move upwards and to the right as the sun slipped down and to the left behind me. My poor wife had to watch me gauging the sun with a fist and then outstretched fingers and then listen to me predict when the chimney shadow would reach our table.

Last night my wife was spared such ordeals as I was working outside, in a small patch of woodland. I watched the sun’s light moving up the trees in front of me. Unlike the crisp edges of the chimney shadow, the edges were blended. The shadows were moving upwards but not following discrete lines. The sun’s light was being broken by low trees in the west and it was beginning to merge with the distant low clouds. Its shadows were constantly reorganising themselves to reflect this as the blue light gave up and the yellows and oranges became dominant.