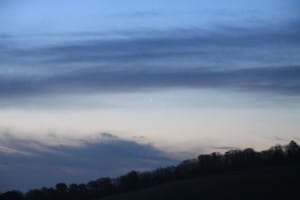 I was up early this morning and caught a great twilight show from Jupiter and Venus. This photo does not do Venus justice, but you might just be able to make it out in the centre of the picture between the two banks of cloud.

Jupiter’s orbit is outside earth’s and so moves through the night sky quite slowly, about one constellation per year.

Venus’ orbit is closer to the sun than ours and so its position in the sky changes quite rapidly. It spends about seven months as a bright object in the early evening sky, before disappearing behind the sun’s glare for about four months and then re-emerging in the early morning for seven months. It then repeats the cycle. Ancient civilisations were divided in their understanding of it, some realising that it is a planet and others giving it two labels, ‘morning star’ and ‘evening star’, without realising they were describing the same object.

One way to remember the order of our solar system is the mnemonic, My Very Educated Mother Just Showed Us Nine Planets  –  Mercury, Venus, Earth, Mars, Jupiter, Saturn, Uranus, Neptune and Pluto. Although this old line is not perfect anymore as Pluto has now been demoted from planet status. Of these only Mercury, Venus, Mars, Jupiter and Saturn can be seen with the naked eye.