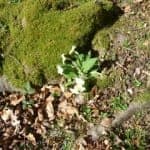 A walk in the woods yesterday revealed some natural and unnatural clues.

This primrose, the only one in the area, was unsurprisingly in a south-facing spot. The thick bed of south-facing moss that surrounds it on the beech roots should not surprise us. Moss grows in abundance close to the ground where moisture levels remain generally high, even in south-facing places. The technique of trail blazing, marking trees to show others the way is ancient, but the chalk markings on this beech tree were a little disconcerting. Apologies, the picture is out of focus as I was hurrying to catch up with others, but hopefully you can make out the following: arrows showing the way, the words, ‘Tom’ and ‘This Way’ and a picture of a sad, perhaps perplexed or even angry face. Hopefully Tom is less sad now, having spotted these blazes and been reunited with his kin. He will no doubt have been sped on his way to that reunion by noting that the morning sun’s shadow meant that the arrows were pointing south north. (Thanks to Shane for spotting my deliberate error on that one!)