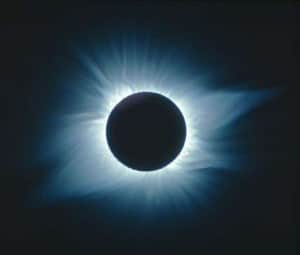 My research into this subject constantly leads me, very willingly, back to the thin line that runs, curving between philosophy, religion, science and nature. If such a line exists – discuss!

I would go so far as to say my work would be very awkward if my personal jury had come in unanimously in favour of any hard views in any of those areas. Sometimes there is a deep longing to know more about things that I know I likely never will. It is hard to articulate this sensation perfectly, but it would perhaps be summed up well by saying that it can sometimes be assuaged by Frank Lloyd Wright’s line, ‘I believe in God, only I spell it Nature.’

There are some natural phenomenon that deeply spiritual people jump up and down about and then point to, in a calm spiritual manner, but which secularists wave away nonchalantly as ‘one of those things’, ‘can be easily explained’ or ‘nothing more than a coincidence’.

Here is an example. The sun is 400 times wider than the moon and 400 times further away. They appear a near identical size in the sky. This is what makes a total solar eclipse such an extraordinary experience; the two most dominant spheres to influence life on earth line up in front us perfectly. Astrophysicists argue this as a neat coincidence, others are less convinced. Personally, I’m happy that my jury stays out, but it does not stop me being very curious. If there is an Almighty and I was granted an audience, I sometimes think that these are the questions I would ask, but then I realise that this is a very Irish way of looking at things. If there is an Almighty then most of the questions would be answered already.