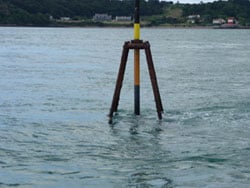 Time and navigation have a cosy relationship, as John Harrison, inventor of the chronometer that cracked the longitude problem in the 18th Century would attest. The sun, earth, moon and planets and stars have at times been seen as cogs in a huge clock.

So many natural phenomena take their orders from these bodies and tide is one of the best known of these. I took this photo of the tide running past a cardinal off Jersey this weekend. The cardinal is an easterly one, signalling that the safer water lay to the east of it. But could it tell us anything else? With two pieces of information, time and tide table, we can discern others such as the speed of the water and its direction. If we had no other references: no sight of land, no chart, no compass, no GPS… that small patch of water could reveal not only where the safe water was but also which way we were heading, all by looking into the workings of the big clock.

A navigator who knew the local waters well could probably gauge most of this just by looking at a rock sticking out of the water and checking the sun and moon.