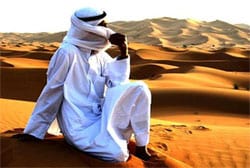 Back from holiday to me means back to the joys and evils of modern life. In the remotest part of south Brittany where we had chosen to hide from the real world for a fortnight, there were no landline telephones, no newspapers, no TV, no radio, no computers and no internet. We had to learn how to speak to each other again which was not an entirely smooth process. If you haven’t tried it recently let me warn you that it is a lot harder than ignoring each other and pretending to text someone.

One of the joys of returning was the ability to access information. One of the evils is being bombarded with the stuff. I decided to focus on the positives last night and used the internet for what it seems best at: unearthing truly obscure bits of information.

I am now the proud owner of a PDF of a downloaded academic article published in 1974 entitled:

‘Bedouin Star-Lore in Sinai and the Negev’

Let me treat you to the first two sentences:

‘Until the twentieth century the Bedouin of the Sinai peninsula and the Negev desert were no less dependent upon knowledge of the heavenly bodies than their nomadic ancestors of countless generations in the Arabian peninsula. The stars were as vital to a Bedouin trying to find his way in almost featureless stretches of the desert waste as they were to a sailor navigating the open sea.’

Oh the Joys! The Joys!