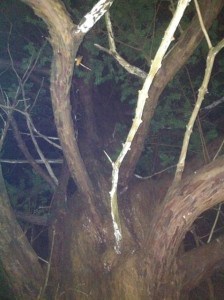 A couple of nights ago I went on a solo night natural navigation exercise, in a patch of woods I haven’t explored before. As it was Halloween I thought I would add a question into the mix for fun:

Did I get frightened at any point and if so, when and why?

I walked for approximately two miles through occasionally dense woodland, a mixture of alternating beech and yew mainly.

The navigation itself was fairly straightforward, despite the heavy cloud cover and lack of moon or stars.

At the start of the walk I could make out the clouds passing overhead, but light levels dropped quickly enough to make that impossible.

In very low light, the ambient glow of the south coast was visible from the higher parts of the hills and the southerly high winds helped bring the sound of the A27 through the trees and over the hills. At no point point did I feel seriously disorientated or lost.

To answer to the earlier question, I experienced two sensations of fear.

The first type is very straightforward. On several occasions I startled pheasants and their panicked escape from undergrowth only a dozen feet away gave me a bit of a frighener the first couple of times.

The second type is a bit more interesting. After walking for about an hour and feeling relaxed and calm, I did notice the onset of a distinct sense of unease that bordered on fear. I wasn’t terrified, but certainly very alert, if not on edge.

The reason? For the early parts of the walk I had been able to move easily with no torch, but by the end the light was too low and the forest too dense to move at more than a snail’s pace without the help of some weak torch light.

The sense of fear crept in when my torchlight highlighted some saplings that had been bent over in an unlikely way and then some other dead wood aligned in a very unnatural way. My suspicions were confirmed when I saw some sawmarks – clear hallmarks of human activity.

My mind raced a little with the thought: there are no animals in this area that I need worry about at this time of year, but people are always a little harder to predict. When I noticed cuts of clematis vitalba nearby it was clear that some bushcrafting had been going on in the heart of this woods. However unlikely, I didn’t like the idea of demonstrating the effectiveness of a snare trap or other piece of wizardry. Not impossible as I was technically not allowed to be where I was.

But with reflection it was not a fear of anything definite, just the sense of being in an environment where the variables had become a lot more variable, if you know what I mean. It wasn’t especially late, but if I had stubbed my toe on someone asleep in a bivvy bag on the forest floor, then we would both have had a real frightener of a Halloween!

On one occasion I happened to notice a lot more snail and slug trails on the southern side of the beech trees. The dried ones stood out especially well, as a silvery thread that glittered in torchlight and was largely absent on the northern side. Had the southern sides retained a little more warmth from the day? Unlikely in the woods and a bit of a stretch that theory; probably it was just coincidence, but you never know… One for me to investigate, once I’m brave enough to go back into the woods again that is 🙂