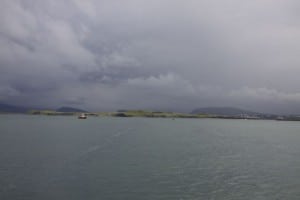 The week is already feeling full with the task of collating and writing up observations from the sail north. At the end of the month I will be submitting them as part of article to the Journal of the Royal Institute of Navigation, for their perusal.

Moving slowly from line to line down the log book has made me reflect on the journey. As is so often the case, the most recent experiences bully the earlier ones out of the way.

At the end of the sail, safely moored at our destination, we treated ourselves to a ferry ride from Reykjavik across to the island of Videy, in Kollafjörður Bay. It feels indulgent and relaxing to watch someone else take charge of a boat, after weeks of shouldering the responsibility yourself.

Among Videy Island’s small claims to fame, or the postmodern equivalent: a line in Wikipedia, is an art installation by Yoko Ono, called the Imagine Peace Tower.

This small, moderately desolate lump of land is the sort of place where the imagination is called to work. Videy is a satellite island off an island, which is itself a satellite off Greenland, off the North Atlantic, off Europe, off North America. Off the Major Players.

Among the things that are not on the island, visitors are drawn towards an abandoned fishing village. Every few yards the foundations that survive mark out a soulless square in the grass. A sign declares, proudly, that this was once a storehouse, or home, but it was abandoned and demolished. Once there was something here, honestly, another sign pleads.

The island calls its visitors to imagine life where there is none. To hear the words of the vicar in the preserved, but austere 18th Century church. It is all beautiful, but it is all so close to moribund.

Videy is barren and empty of modernity, but such vacuums are quickly filled with thoughts. It is the sort of place that makes sense of Socrates’ wisdom, ‘Beware the barrenness of the busy life.’

It was a moody day and low, dark clouds rolled over the island, occasionally offering a light shower. Visibility was poor, but looking east, back towards the mainland, the shape of the land did reveal itself. Whenever there is a small temptation to meditate on the lack of wonder in the life of these places, we are missing the something that can restore it. Falling towards believing there is little of interest is usually a prompt to raise our awareness levels.

The islanders may have failed to build a lasting community on this island, but they tried. The failed effort marks the land and restore’s a sense of balance, respect and even a little joy in the optimism of those who have gone before.

Man’s efforts, so often feeble in the face of nature are efforts all the same. We do not get to lament those that made no effort at all.

The forces that snuffed out many communities were hard to feel in late June. The clouds, even those that aspire to menace, are pathetic candy floss to the smashing dodgem cars that came before, the glaciers.

Look at the shape of the hills in the photos. Assymetrical, as almost all nature is. They looked like drumlins to me at first, but now I’m less sure. Whatever the technical term for these shapes is, their language is more primal. They scream of the slow violence of icy erosion. The ice does not move one way and then another, it flows in one direction and sculpts as it moves. Notice how every piece of elevated land in these pictures has been shaped by the ice.

These patterns can be found wherever ice has governed the land and once spotted they help us to align ourselves with the land.