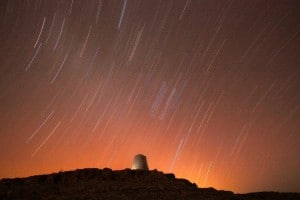 The last astro quiz proved so popular that I thought we’d do another.

This fantastic photo was taken by the expedition photographer, James Walker.

Thanks, James, for permission to use it here. Do check out James’ website, there are some stunning images, but only after you’ve had a go at answering the questions below.

Which way are we looking in this picture?

Bonus: roughly what latitude was the photo taken at?

Photography tip from a pro: The tomb in the picture was not illuminated and James achieved this effect by keeping the shutter open whilst he climbed up to the tomb. Whilst there, he used a flash to illuminate the tomb, making sure that his body was always between the flash and the camera, to avoid any of the light from flash spilling directly into the lens.

There are two ways of working out whether it is east or west if you know your location, but only one if you don’t. The bright stars forming the shape of Orion can be made out in the middle of the picture, in particular the three stars of Orion’s belt. With experience this shape alone tells you it is Orion rising.

In the picture above we are looking due East.

The picture was taken in Oman. The clue to that latitude is the angle of the rising stars, which is always your co-latitude, that is 90 degrees minus your latitude. Here the stars are rising at approximately 67 degrees (up from horizontal), because the photo was taken at approximately 23 degrees North.

It all sounds much more complex than it is, initially at least. This is a great free program to help you visualize these things: Stellarium.

On a different subject, the first review of The Natural Explorer has come in:

“The Natural Explorer is an essential part of any outdoor/nature writing library and it works in several ways. It’s a cogent paean to the glories of nature, a subtle manifesto, a call to arms to get out and appreciate the wonders of the natural world. It’s also full of wonderful examples of how to better read, understand and connect with the landscape.”