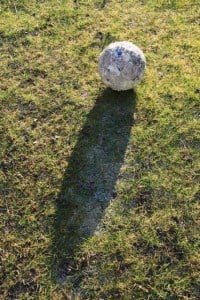 It is that time of year again. The sun and Jack Frost are working together to paint the land.

In this photo of a dog-mauled football, we are looking southeast. But why does the football’s shadow appear longer than the patch of frost? Surely, since the sun is rising it should be the other way round?

Useless clue: it doesn’t have anything to do with the dog, who wisely avoids footballs until they are well defrosted.

UPDATE: The patterns of frost we see as the day wears on are shaped by more than one factor.

The areas that have received direct sunlight will of course thaw faster than those that remain in the shade.

The colour of a surface has a huge effect too. Dark earth will thaw faster in the sun than light-coloured stone.

The wind also has a big impact on any day with a light breeze or greater. The air the breeze brings will normally be warmer than the ground that has frozen overnight thanks to the heat that has radiated up during the cold night. This warmer air will thaw places according to their exposure. The next time you are in an airliner crossing over snow-covered mountains notice that the lower limit of the snow, the snowline, is not a perfectly straight line. It undulates. It will typically be slightly higher on the southern side, where the sun can warm the ground, but even on one side the line will move up and down according to gradient, the shape of the land and the prevailing wind direction. Where a valley aligns with the prevailing wind direction, its snowline is often noticeably higher as the snow has thawed to a higher level than the surrounding ones.

In the picture above the small patch of grass that has thawed just to the right of the football’s shadow tip has lost its frost because it is marginally higher than the surrounding grass. The sun may have found it easier to reach this patch, but it is also because the warmer air of the day has already found this grass. The warmer air and sun have failed to melt the frost of the grass that is a few centimetres away because it lies a little lower.

By mid-morning the grass is often a patchwork quilt of frost and green, a mixture of areas that have received direct sunlight or warmer air and those that have not. There are clues to direction in these frost shadows, even when the sun has hidden, and a lot more besides.