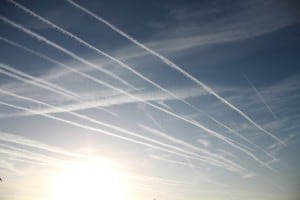 We may never know the exact method that the earliest explorers used to find their way, but there is a friendly finger of suspicion that gets pointed regularly at the birds.

Some of the routes used by the pioneers of the Pacific match the migratory routes of the birds exactly.

The route used by the Maori fleet that sailed from Tahiti to New Zealand sometime in the fourteenth century and settled there is the same as that taken by the Long-tailed Cuckoo each September.

I like to think of these earliest navigators. I imagine them gazing up as flocks of birds head uniformly over the horizon in one direction only to repeat the exercised in the opposite direction half a year later. It does not take great leaps of the imagination to deduce that the birds are not doing this great exercise for fun, QED, there must be something in the direction they that travel. All that would be needed to follow them in a boat would be curiosity, desperation or a mixture of both.

I often think back to these times when I see contrails from aircraft high up in the sky. These great tin birds are not ploughing the blue for fun either, they each have their distant destination. And, like all journey patterns, there is nothing random about these lines.

Contrails over the UK are formed in a northwest-southeast direction more often than any other alignment. I took the above photo this morning and it shows a ‘flock’ of northwest/southeast contrails. But I’m sure you knew that already, from the sun in the bottom left corner.  🙂