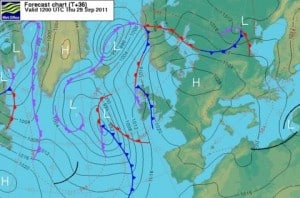 A blog of two halves for you today.

Late September can bring some of the best early evening experiences for those who enjoy looking upwards.

Visibility is likely to fluctuate a bit, but it looks as though we may get some of the best stargazing weather of the year over the next few nights. It promises to be warm enough to enjoy long spells outside, but without the crazily late sunsets of midsummer.

I’ll point out a few of the things worth looking for in a minute, but first just a few words about this weather.

On my courses I encourage people to take note of shifts in wind direction and how this relates to changes in weather patterns. If the weather is unseasonably warm or cold, we should expect some deviation from the prevailing wind direction, southwest.

The image above shows the UK (at lunchtime tomorrow) sandwiched neatly between a high pressure system over the continent and a couple out in the Atlantic. Winds rotate clockwise around a high pressure system and anti-clockwise round a low pressure. The net effect for us will be winds that will be coming from the south and southeast. Southerly winds tend to bring warmer air, and southeasterly winds from over the continent bring drier air than the moist southwesterly winds from over the Atlantic. Hence the warm and dry conditions.

On to the night sky…

As the sun sets the brightest stars will start to show their face. The bright yellow and orange Arcturus will appear low in the west not long after sunset.

In the south there will be three bright white stars worth looking for. Search for a large triangle that occupies the high southern sky. This triangle is made up of the three brightest stars, Altair, Deneb and Vega, from the constellations Aquila, Cygnus and Lyra. It is not surprising that sailors have learned to abbreviate this family to the nickname ‘The Summer Triangle’ or ‘The Navigator’s Triangle’.

The star of the show will undoubtedly be Jupiter, rising at about 8pm just north of east, he will be ruling the eastern sky with pomp by 9.30pm.

Many, many people will accuse this majestically bright white object of being Venus, Sirius or the North Star.

In reverse order, it can’t be the North Star as that is not a particularly bright star (and, as you may well have deduced, is in the north not the east) and it couldn’t be Sirius as Orion is nowhere to be seen. There is no way that it could be Venus, as Venus lives near the sun. If the sun has set then it is well to the west of us and we are looking east. If you are up early in the mornings, Orion will be on watch over the southern sky, with Sirius burning brightly not far below him.