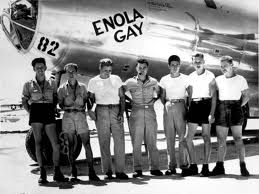 My thanks to William Goble for bringing my attention to a extraordinary piece of navigation history.

Although standard practice in aerial navigation at the time, it is now remarkable to consider that the most powerful weapon in the history of warfare was guided using the stars. The Enola Gay dropped its atomic bomb payload on Hiroshima after an 1800 mile flight where the aircraft’s position was checked using the stars. From the Guardian article:

‘Van Kirk’s role was navigator: “We did things the old-fashioned way: celestial navigation, telling your position by the stars. We had a dome up top of the plane to sit up in and shoot the stars with a bubble sextant.”

The full article can be read in the Guardian Online.