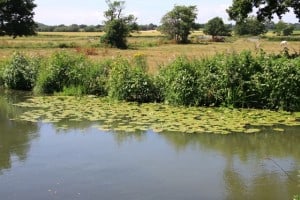 Great to see so many willing to take on the heat of the summer on Sunday at the Uckfield Festival.

My day started with a breakfast interview with Barry Horsham at Uckfield FM, but then it was time for a four hour natural navigation walk in the Barcombe area. Thanks to Bernard Tagliavini for organising it and to everyone who came on the walk, it was a baking day but we tried to find patches of shade to stand in as we studied the trees, the clouds, mosses, lichens and the sun itself. We even found ourselves discussing Pacific sailors as we watched the ripples in a stream. (The ripples were less dependable in the areas where teenagers had been forced into the water by the midday heat for a wild swim.)

Something that I had not noticed before was that there appeared to be a much greater number of lilies on the northern side of the streams than the southern. Something I will be keeping an eye on in future to see if this is a dependable trend.