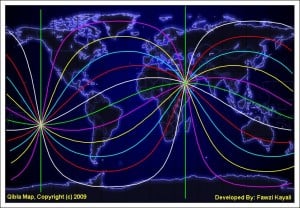 I came across this fantastic map showing the direction of Mecca, known as ‘al Qiblah’, from different parts of the world.

It shows quite beautifully how counterintuitive it can be over the surface of a sphere. Who would have thought that the direction of Mecca, in Saudi Arabia, from New York is northeast? This is due to the fact that the direction is calculated using the shortest route and this is what is known as a great circle route. If you want to get from A to B across the surface of a sphere then the most direct route will always be a part of a circle which if continued would wrap itself all the way round the Earth, in a full circumference of the planet, and return to exactly the same point as you started at – a great circle. (This is the reason that airline route maps show routes that curve up towards the north pole in the northern hemisphere and down towards the south pole in the southern.)

The other thing that this map shows that is logical, but also quite strange to think about is that there is a point in the Pacific, on the opposite side of the Earth from Mecca, where it does not matter which way you face, you will always be facing towards Mecca. This is an identical concept to the idea of all directions being south from the North Pole, just a bit quirkier. You can imagine quite a heated debate on a ship at that point in the Pacific as the Muslim crew get out their prayer mats on the deck of the ship!

You can work out the direction of Mecca from your location on this website.

Navigating with the Tuareg in Libya