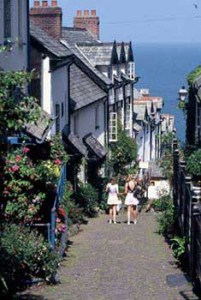 President Obama was visibly furious with his British escort team after his secure cavalcade accidentally drove into the tiny Devon village of Clovelly. The armour-plated vehicles were too wide for the narrow cobbled streets and became wedged. Locals of the picturesque, but sleepy fishing village were woken by the sound of police motorbikes and two helicopters overhead. One resident told us, ‘Mr Obama was clearly upset, but we gave him a nice cup of tea and some homemade biscuits and that seemed to settle him.’ Mrs Avril, from the tourist board thought that it was due to the lead driver following his SatNav, ‘One of the policemen seemed very irate, he ripped a gadget off his motorbike and was jumping up and down on it. I told him he should have realised that he was heading the wrong way just by looking at the sun! That upset him even more and he threatened to “find some class A gear in my cottage, if I didn’t keep my mouth shut.” Very rude he was.’

There is only expected to be a short delay to proceedings at the G20 Summit.