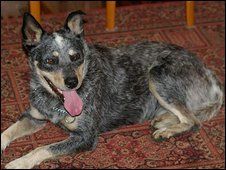 I came across this story this morning about a pet dog, Sophie Tucker, that was washed overboard in rough conditions during a sailing holiday off the Australian coast and swam five miles to the small uninhabited island of St Bees.

The story focuses on the distance swum, which is incredible enough, but makes no mention of how the dog found the island. We can rule out vision, because she would not have been able to see further than about twenty feet in front of her in those conditions. Even in flat calm a dog would barely able to see the tops of trees five miles away because of the curvature of the earth’s surface.

Smell is the most likely solution, but that points to an even tougher dog, because to follow the smell of land she would have had to swim into the wind and waves, which would have been horrific.

Another hard to explain example from the canons of animal navigation stories. One that will no doubt fuel more speculation about a sixth sense.